I was researching a stock investment this week when I came across a chart that was a little stunning.  As depicted below, solar has already reached a tipping point in California.  This got me thinking about the broader implications since what starts in California very often eventually sweeps across the rest of the country.  In this case let’s hope that is the use of ever cheaper solar power and not an ever rising cost of grid power. 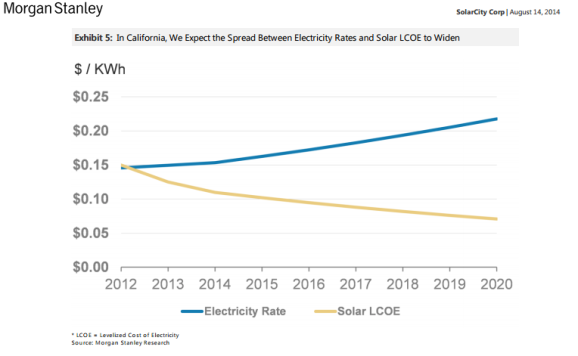 We heard so much negative news about solar power after the big wipe out of firms like Solyndra that it could be easy to assume the sector is just one more government subsidized pipe dream.  I think it is closer to the mark to realize that the recent wave of bankruptcies was more similar to the large extinction of doc com companies we saw after the internet bubble.  There was a huge wave of investment, some of if in very dumb things like pets.com, but much of it in firms that went on to be great and indeed several who are now changing the world.

The research I was reviewing was produced by Morgan Stanley, and it went on to state that they believe, “We forecast the addressable market for residential solar in the US at 168GW by 2020, significantly above the <4GW of installed capacity today”.  So we are talking about growing the distributed solar power market in the US by 42 fold, really?  That seems like a lot, and we’ve all seen the classic hockey stick charts folks use to sell you on the value of their stock.  It is one more way in which this trend reminds me of the dot com era, sales forecasts that went ever upward and to the right. Funny thing is that for the industry overall those forecasts turned out to be right with ecommerce and now mobile commerce surpassing even the rosiest of forecasts used to raise funding during the first internet wave.

One important thing to consider for now is that the US is not California, thankfully when it comes to energy policy and costs.  The cost for grid power in much of the country is much lower but it has been consistently rising the past several years and most forecasters expect this to continue as we phase out coal with natural gas.

So does anyone see the big deal here?  If the first chart is right and the levelized cost of solar has already dropped to around 10 cents/KWh this is not just a California thing its an everyone thing.  This is I think a classic tipping point where from this point forward everything around this whole discussion will change.  For now the discussion has mostly been about the green guys vs. the fossil fuels folks.  One reason real information on anything to do with energy is so hard to come by for the average consumer is that the volume of hyperbole from these two factions is simply drowning out most of the facts.

If we listen to the green guys then we should just turn off all that coal, oil, and even natural gas to just live on air and sunlight.  If you listen to the fossil fuel folks then all of that is just fantasy and we simply need to drill baby drill.  Both of these points of view are wrong.  We need fossil fuels to make renewable resources useful.  Solar power itself just became energy positive this year, and that’s after two decades of intense development.  What do I mean by energy positive?  Simply that the solar cells manufactured and installed are just now producing more power than was consumed by their manufacture.  The good news here is that we are on the positive side of that balance and it can snowball from here, but my ultimate point is that without fossil fuels and energy we cannot get to a renewable future, and it takes decades to move the needle not years. 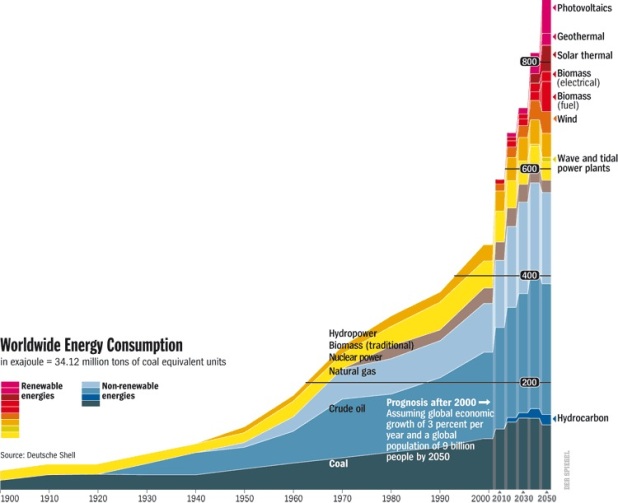 if the chart above is anywhere close to right, then the real story is not fossil or renewable it is a lot of both.  It will take every bit of energy we can find and harness to continue to grow our economy fast enough to provide prosperity to a growing population.  “All of the above” has been used as a political slogan by some, but it’s more than a slogan, it is a necessity.  We only experience growth when we have sufficient energy to use to power that growth.  This is what has lifted billions out of poverty since the start of the industrial revolution in the 1850’s and it is the only thing that will continue to deliver prosperity and security to people no matter where they live.

Once we have renewable energy sources that can truly scale and compete on cost then we will truly be entering a new energy era, and nothing can gain more scale than solar.  The total solar energy absorbed by Earth’s atmosphere, oceans and land masses is approximately 3,850,000 exajoules (EJ) per year. In 2002, this was more energy in one hour than the world used in one year.

So what happens when solar is cheaper than the grid?  Good things, very good things.