First the biggest trend impacting the US fuels industry at every level is the long term decline in gasoline demand.   Gasoline demand is expected to drop 30 billion gallons, yes billion.  With the average fuel marketer being around 30 million gallons a year, we are looking at the potential demise of 1,000 distributors.  The industry from refining through distribution and on down to the street at retail has been structured to serve a market that has grown around 1% a year for many decades.  A reversal of the gasoline market to one of shrinking demand will remake the entire fuels industry.

Refiners must now count on exporting their way to prosperity.  Distributors will consolidate to survive and those survivors must continue to lower costs to grow profitably.  Fuel retailing will evolve to where gasoline is increasingly just an important category for many different retail formats, but will cease to be a product that is a reason for a store to exist on it’s own.

We continue to see grocery stores, dollar stores,  and big box retailers add gasoline as a product line, while the most successful convenience stores are hardly conventional with many having a bigger food business than they do fuel at least from a gross profit perspective.   Both of these product line views on retailing gasoline will continue to become the norm rather than the exception as demand continues to drop and the interval between fill ups for consumers continues to lengthen as fuel economy doubles over the next decade or so.

A second significant trend is the increasing specialization of petroleum marketing companies.  When I entered the industry 20 years ago there were nearly 12,000 distributors.  Today there are by most counts around 4,000 left.  So consolidation has been a theme in the downstream industry for many years.  If we think about it in another way approximately one distributor per day has been acquired or absorbed by another for the past 15 years, one a day.   But consolidation today is different than the traditional neighbor buying neighbor largely local mergers we have become accustomed to.

In the past few years we have seen significant growth of petroleum distribution and marketing companies that are either largely or entirely focused on one product line.  Companies like Reladyne and PetroChoice have brought significant amounts of private equity into the industry to first consolidate lubricant businesses and then to invest in growing those lubricant distribution companies into more advanced service providers to industrial, automotive, and fleet customers.  Similarly we have large retail companies becoming public MLP’s and then many other retail focused distributors being acquired by these public company’s who have access to large amounts of capital and tax advantages.

This specialization trend is intimately related to the demand trend.  With demand for the largest product category, gasoline, declining every other product category is directly impacted.  Historically many of the most successful distributors were retail marketers first and they supplied lubricants, diesel, and maybe propane because they were there and because their primary product was growing they could afford to invest in diverse product lines.  Now for many it is focus or die, and as lubes divisions or commercial fuels businesses are sold off they become the raw material for other firms to specialize and grow.

Will the generalist who still provides lubricants, commercial fuel, branded retail fuels marketing, propane, and even chemicals or other related product lines survive or thrive in a world of larger more specialized competitors?  The answer so far seems somewhat geographic and demographic.  In the Eastern US where there is sufficient population density and many markets close by geographically specialization is much further along.  In the Rockies where you may be 300 or more miles to the next closest market of any size being able to offer a wide selection of products to a smaller population seems to be keeping the traditional Marketer who does a little bit of everything stable to growing for now.

The last big trend driving change in fuels marketing and distribution is newer than the other two, less understood, and potentially of even bigger impact overall.  That is the trend of exploding US production of crude oil and natural gas.  Why would this impact the downstream?  Haven’t oil companies been splitting off upstream from downstream like both ConocoPhillips and Marathon’s recent splits?  Yes so far the trend upstream has been arms length to downstream distribution and marketing.  But can such a fundamental change in the primary supply of our key commodity remain an arms length phenomenon for long, I for one don’t think so. 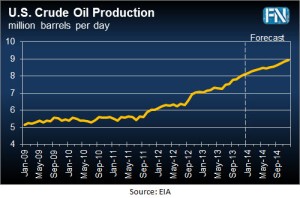 Will we see new large producers like Continental Resources who cannot export crude and are “giving up” big discounts and record crack spreads to downstream refiners accept being disadvantaged and disconnected from direct demand stand pat?  What about existing refiners that are faced with declining demand but still growing capacity?  Will they be confident enough in export growth to continue being comfortable being largely disconnected from end use customers?  We simply do not know yet how these upstream and refining changes will impact those of us distributing and marketing fuels.  I believe we can be sure that changes of that magnitude just upstream of us will be felt, and likely sooner than later.  With the the pace at which production is growing and refining is expanding, change is surely coming.