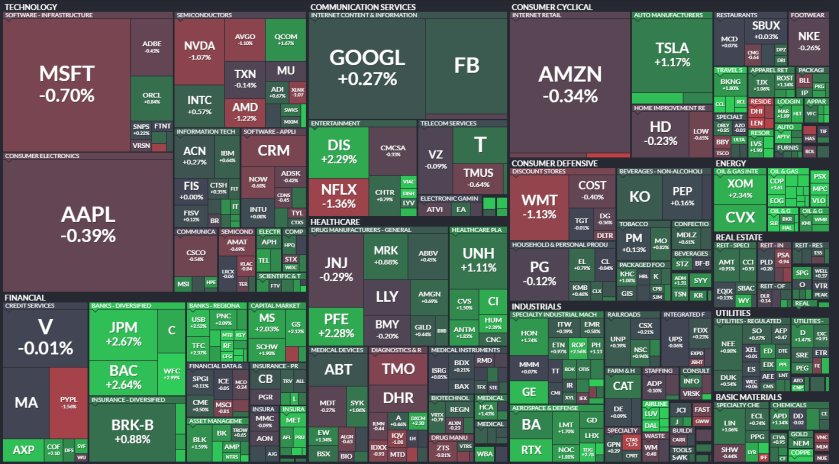 The common refrain from climate activists is that actions to reduce emissions are held back and sabotaged by the massive size and influence of the Oil & Gas industry. Market reality is making that claim increasingly hard to make. We now have single companies in the technology space that in terms of traded market value dwarf not only the likes of ExxonMobil, Chevron, Shell or BP but the entire publicly traded market value of the industry combined.

I have picked Apple as an example to make the point here but we could also choose Amazon and probably either Microsoft or Google would be pretty close as well. Instead of lists and tables I think the Market Heat Map view is the easiest visual way to see this new reality. I am using the one from wallmine, Link HERE, and graphic extracted below.

Now this depiction is just covering US exchanges so yes if you added the TSX to capture the Canadians and Euronext, LSE, and XETRA to cover the Europeans it modifies things a little bit, but not all that much.

So when you hear about how the big bad oil and gas industry is holding the climate hostage by exercising all of their massive market, political and financial firepower maybe think about that phone in your hand. The barriers to a transitioning to a low carbon world are not primarily political, yes that matters, but the real challenge is invention, innovation and engineering. Protests and proclamations won’t solve those challenges but the most innovative and well capitalized companies in the world just might.

Those of us in the energy industry will do our part, and we are still big enough to matter. But with the technology companies holding so much of the worlds capital, both human and financial, the path to a low carbon future is going to take all industry collaborating, innovating and inventing together to drive new solutions forward. Throwing insults, holding protests, and directing political assaults at the companies that today keep the world moving forward in order to be able to pursue that future will not.